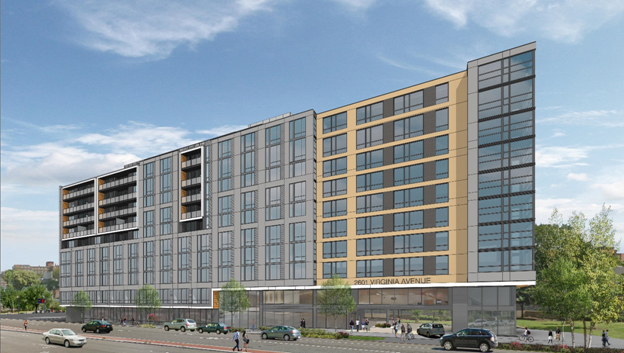 Washington, DC, August 11, 2016– Urban Investment Partners (UIP) of Washington, DChas acquired a ten-story building at 2601 Virginia Avenue, NW across from the Watergate mixed-use complex for $36 million. The seller was George Washington University (GWU), which had used the building as student housing for 17 years.

Hall on Virginia Avenueachieved notoriety while operating as a Howard Johnson hotel in 1972. Rooms 419 and 723 were used as lookouts forthe “Watergate burglars,” who broke into offices of the Democratic National Committee in the Watergate office building. The ensuing Watergate scandal led to the 1974 resignation of President Richard M. Nixon. Room 723 was preserved as a museum until 2001, when the exhibit was moved to the GWU archives.

GWU demolished the property’s interior about a year ago,planning to create new student and faculty housing, but decided to sell the property instead. CBRE’s Bobby Meehling, Andy Wimsatt, and Peter Larkinrepresented GWU in the sale.

UIP plans to developabout 200rental apartments within the existing 97,300 SF core and shell, and build about 50 more units in a new 40,000 SF addition on the building’s east side. UIP also will create an 8,000 -10,000 SFrestaurant/coffee shop on the first floor, which will be a fully activated space for residents and neighbors.The building has underground parking for 200 vehicles, plus bike storage and care facilities with lockers.

“We are going to create something never seen before in this city, focusing on access to the park and the river, promoting a healthful lifestyle that includes fitness, exercise, and fresh food,” said UIP Principal Steve Schwat.“This is going to be an exciting place to live, equidistant from the Georgetown waterfront and the Foggy Bottom Metro stop, which is just a five-minute walk away.”

“This transaction is consistent with our strategy of acquiring underutilized structures in prime locations and restoring them to productive use as Class A multifamily buildings,” said UIP Vice President of Development Brook Katzen. “There are a number of unique elements that make this one of the most exciting projects I have worked on at UIP. We look forward to enhancing the Foggy Bottom community with a best-in-class project.”

Boathouse enjoys an irreplaceable location in the famous Foggy Bottom neighborhood in close proximity to Georgetown, GWU, the John F. Kennedy Center for The Performing Arts, and the recently renovated Watergate complex. Both Georgetown and Foggy Bottom are almost completely built out, with significant regulatory constraints preventing further development. With a walkscore of 86 and a bikescore of 94 (from www.walkscore.com), Boathouse will provide incomparable access to the area’s wealth of restaurants, shops, cultural destinations, and recreational venues.

Earlier this year, UIP purchased three commercial office buildings from American University, and is converting most of the newly acquired space into new apartment dwellings. “Converting both hotels and office buildings to multifamily use is not much different than converting older apartment buildings, as we have done all over the city,” remarked Schwat.

The UIP family of companies owns and manages more than 2,500 apartments in Washington, DC and Maryland and has renovated, restored and built more than 20 downtown apartment buildings and condominiums over the last ten years. UIP’s primary focus includes “heavy lift” renovations as well as working with tenants in Washington, DC,helping them exercise their TOPA (Tenant Opportunity to Purchase Act) rights. UIP also is active in entitling land, infill development, and acquiring residential assets in the close-in Washington, DC suburbs. For more information, visit www.uipllc.com, www.uippm.comand www.uipgc.com.